I am over the moon thrilled with how my book trailer turned out. Let me know what you think.

A typical weekday looks like this: get up, lay in bed until the last minute, rush out, dress the baby, snag the kids and take them to school. From here I either run to the grocery store, Target, grab a Starbucks, head straight home or take the baby to the park for a walk. If I come back home, I’m usually pulling into the driveway by 7:45 AM.

This morning, it was raining so while I still did the lazy butt mom thing in bed before I dashed off in the rain, I avoided further outings because of the weather only to find that my day was about to take on a new persona. The Internet and phone kind of personality.

Let me back up by stating that I’m a stay-at-home mom/part-time worker/author. I allow 12-15 hours per week for my part-time gig, 10 hours a week for my editing work and 10 plus hours (depending on deadlines) for my writing. All of these battle with my time as a mom (3 kids: 2, 10 and 13), wife and domestic goddess (I’m trying to get his nickname to stick).

So when I’m finally home, I set up shop in front of my computer, put a movie or 100 in the DVD player and get ‘er done. But today I was sucked into a Twilight Zone. My internet was down and the phone wouldn’t work and for a second, as I clutched my cell phone in my sweaty hand, afraid to release the only lifeline I thought I had, I was about to freak out. Was I stuck at home without any contact with the outside world? If I died, would they find me still holding my cell? Then I looked at the baby and I swear she smirked. She knew I was stuck with her all day and not paying attention to my computer. She could smell the fear and it stank worse than a day old poopie diaper.

But then I woke up and dialed my husband, because duh, my cell phone still worked! Just not the internet on it.

I emailed my boss (once I turned off the wifi on my phone, again, duh) and told her this was a blessing because I was feeling rather scattered lately and maybe this would give me a second to gather my thoughts, plan out my schedule and get those darn bills paid. I was going to cherish this small gift I was given. Turn what I thought was a negative into a positive. End the day feeling good.
And then the most unexpected thing happened. An hour later, my service was restored and all I have to show for it is a rather lengthy text conversation with husband about bills (no sexting here), I tried green tea and honey yogurt (not a fan), baby ate a banana, I created two lists (one for home and one for work) and I wrote this blog post all before I had a chance to brew a cup of coffee.

Phew, I’m exhausted. I think I might crawl back into bed, put on a kid movie and toss the baby in with me and try to grab a few winks before I have to pick the kids back up from school. My domestic goddess body needs a rest!

I mean, look at this kitchen. Doesn't it make you feel sleepy looking at it! 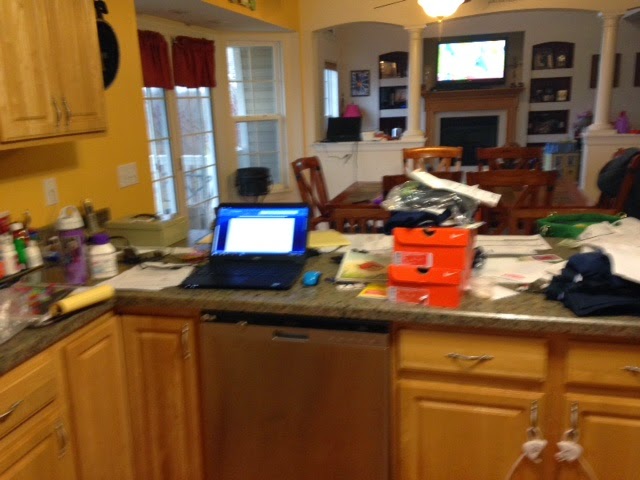 Eat Your Breakfast by Arlene Hittle, author of Breaking All The Rules

They say breakfast is the most important meal of the day.
Allyson Cunningham, the heroine of my new romantic comedy, Breaking All the Rules, certainly believes it. Her standard breakfast — Cheerios, strawberries and skim milk — comes up more than once.
You see, Allyson is rather particular and very much rules-oriented. She eats her cereal, fruit and milk every morning before work and has brunch with her friend Nikki at IHOP every Saturday. She only eats red meat once a week and avoids carbs whenever possible. (Can’t tell I was doing Atkins when I drafted this story, can you?) She and hero Donovan Marshall clash over her stubborn insistence on sticking to her food rules.
That’s not their only point of disagreement, of course. Van’s relaxed approach to work — and life in general — rankles Allyson.
At the same time, it intrigues her — as it does me. I’ve always been a bit like Allyson — set in my habits and resistant to change. (Except with food. I love trying new restaurants and dishes I’ve never tried before. Among the strangest: alligator and escargot. I’m more likely to try a new flavor combination than a really weird food.)
My boyfriend is more like Van — always ready for adventure, even if it has “DISASTER” flashing on it in 10-foot-tall neon letters. One time, we took off for Phoenix without a hotel reservation and ended up driving home in a snowstorm because all the hotels were booked — even the $28 a night rat-trap motel. I believe it was both the opening weekend for spring training and NASCAR race weekend. Plus, there was a dart or pool tourney in town. We didn’t stand a chance.
The uncertainty stressed me out, and my headache worsened every time we struck out at a new hotel. I ended up lying down on the backseat to sleep it off. That left the Cali boy to drive up the mountain in the snow, and he ended up pulling off at a truck safety pullout to wait it out. Fun times.
Back to the book: Allyson is desperate to get Donovan to do his job (translating Klingon at the mental health facility she runs) right — the first time — and Van makes it his mission to prove to Ally that some rules, including food rules, are meant to be broken. Breaking all the Rules blurb:

Faced with compliance of a ridiculous new Arizona law, by-the-book mental health care facility administrator Allyson Cunningham must find an interpreter who speaks a made-for-TV language. Prime candidate Donovan Marshall has the language skills she so desperately needs, but shows a disturbing disregard for all rules and restrictions. While Allyson struggles to secure another perfect rating for her facility, convince Donovan to conform and control her inappropriate attraction to an employee, Donovan makes it his prime directive to persuade starchy Ally it doesn’t hurt to break a few rules. About Arlene: Arlene Hittle is a Midwestern transplant who now makes her home in northern Arizona. She has her father to thank for her love of all things sci-fi. He took her to see Star Wars when she was six. She immediately fell in love with R2-D2, C3PO and Luke Skywalker. (Only with the Star Wars re-release in the ’90s did she succumb to the bad-boy appeal of Han Solo.) Find her at arlenehittle.com, on Twitter or on Facebook.

I have to say, all of these goofy days, this might be one of my faves (although Pi Day was pretty yummy).

So, kids, on March 18th, you must forgive your mom and dad. Because no matter what, they will always love you and they mean well.

Happy Buzzards' Day! These lovely birds used to circle above, signally to cowboys that something that once was alive is now dead.

But apparently, Ohio residents look to the skies on March 15th because they feel the birds are a sigh of birth!

Huh, who knew. I think it's kind of weird that a bird who circles dead things is also celebrated on the Ides of March....