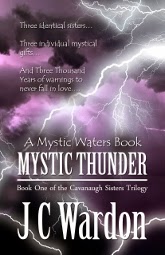 EXCERPT:
Rayne broke free of the tangle of cars and sped-up to head toward the highway and home. Tears formed from both the pain in her skull and the realization that she was forever trapped by genetics that had finally exposed her to the world, and, not unexpectedly, ended what she’d hoped was a promising relationship.
She wanted to scream out her anger and frustration. She wanted to crash into something and shatter it to smithereens. After years of extreme caution, one persistent child ghost succeeded in making her break the first and most important rule her family lived by. She had failed to keep the secret that safeguarded them all. And she had to hurry home to let them know before they heard about it from someone else or saw it on the news.
The exit ramp leading to the highway was as congested as it always was this time of day, so Rayne ignored that route and kept on driving, ending up in the lower income side of the city few tourists ever saw. Los Angeles, the city of Angels, was not so angelic here.
Disreputable business establishments gave way to weathered homes with shabby yards, some with garbage littering streets and lawns, and many with rusting cars sitting atop concrete blocks. It wasn’t a part of the city she knew well. She kept on driving and continued wiping at her nose until the leather seat on the other side of the console filled with bloody tissues.
Rayne kept her speed down and her eyes on the residential road as she reached for another tissue, only to feel the box was empty. She pinched her nose with her finger and thumb, and was nearly gasping for breath as she glanced over to see if there was a used one that wasn’t too saturated. When she looked back up, her breath hitched as an image jumped in front of the car.
Slamming on the breaks flung the used tissues, the empty box, and her purse from the passenger seat onto the floorboard. Her heart beating wildly, Rayne stared at the large ghost before her as its glittering essence mingling with the heat vapors radiating from the hood of her car. Panic turned to anger and finally to despair as she recognized the pesky ghost who made a habit of harassing her.

About JC:
JC Wardon is the author of the Mystic Waters Books, published through Turquoise Morning Press. As a lover of the paranormal romance, the psychological thriller, and the suspense of dangerous plots, all woven into one, JC creates stories that will curl your toes, and make your heart pound.

Her Cavanaugh Sisters Trilogy kicks off a thirteen-book series rollercoaster ride that will leave you captivated. Whether you’re titillated, tantalized, breathlessly horrified, or shocked to the core, JC’s books always conclude with a sneak peek into the next breathtaking trip.

As of this writing, seven of the thirteen Cavanaugh Series Books are in publication, with the remainder to come out over the next year. Though the trilogy: Mystic Thunder, Touch of Lightning, and Tempest’s Embrace novels must be read in order and in their entirety, to solve the two major quests the characters are burdened with, as well as set up the complicated foundation for the future Cavanaugh series novels, the remaining books can stand alone. However, each subsequent book’s characters build from the ones that came before. (They are a family, after all!)

Due to the time constraints of meeting publication deadlines, JC does not currently have a blog, but you can check out all her current and upcoming releases at: http://jcwardon.com where you are free to comment on your reading experience, or even ask questions.

REVIEWS:
“I would say that J.C. Wardon is a shining new star in the paranormal genre.” Debra Taylor, The Romance Reviews

“Wardon has crafted a page-turner with the first of the Cavanaugh Sisters Trilogy.” Karen Sweeny-Justice, RT Book Reviews