I'm very happy to have Skeleton in a Dead Space by Judy Alter on Book Nibbles. *hip hip hooray* 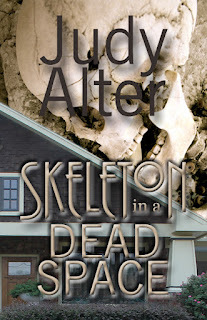 Where you can buy this mystery for only $3.99.
Blurb:
Kelly O’Connell never thought real estate was a dangerous profession, until she stumbled over a skeleton in a dead space in an early-twentieth-century Craftsman house she was transforming into a coveted modern home in an older urban neighborhood in Fort Worth, Texas.
From that moment, she runs into teen-age gang members, a manipulative ex-husband, a needy and single pregnant friend, a cold-blooded murderer, and a policeman who wants to be more than her protector. As free-spirited as the chocolate-peanut-jalapeño candy she craves, Kelly barges through life trying to keep from angering her policeman-boyfriend, protect her two young daughters, pacify her worried mother a thousand miles away, and keep her real estate business afloat. Too often she puts herself in danger, and sometimes it’s the girls, not Mike, who come to Kelly’s rescue.
About the Author:
Judy has written fiction and nonfiction for adults and young adults. Her historical fiction titles feature such strong women as Elizabeth Bacon Custer, Jessie Benton Frémont, Lucille Mulhall, and Etta Place, of Hole in the Wall gang fame. Skeleton in a Dead Space is her first mystery and is the first in a projected series. Recently retired as the director of a small press, Alter raised four children as a single parent and has seven grandchildren, with whom she spends as much time as possible. Judy lives in Fort Worth, Texas, with an Australian shepherd, an aging but affectionate cat, and a brand new Golden Doodle puppy.

My two cents:
I haven't read Judy's book yet but with a sequel coming out in May, I have added this to my TBR pile. I'm not usually a mystery reader but lately, I've found myself picking more and more up from the genre. I know Judy and she's a delightful person. From what I understand, all of the her books take place in her hometown and you can actually visit these locations! How cool is that!
Posted by JenA at 3/16/2012 02:00:00 AM

Email ThisBlogThis!Share to TwitterShare to FacebookShare to Pinterest
Labels: Judy Alter; Skeleton in a Dead Space