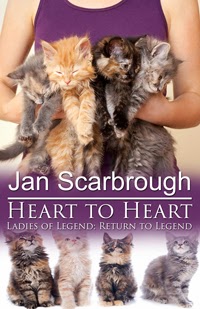 The Cats of Heart to Heart

Heart to Heart is part of a four book Ladies of Legend series called Return to Legend. The premise of all four stories is the return to Legend, Tennessee, a fictitious town created by authors Maddie James, Magdalena Scott, Janet Eaves and me.

When I wrote the story of Heart to Heart, about an animal communicator and her relationship with the owner of six cats, I knew the cat characters were critical to the story. I thought it might be fun to honor a few of cats I knew, as well as those of my Legend co-authors.

Tinkerbelle
Last winter dogs killed a cat named Tinkerbelle at the barn where I take riding lessons. The character of Tinkerbelle is my way of honoring this sweet, little cat.
Notes: Long hair pale gray – gentle – likes attention and being the center of things
Quote: “The gray cat had followed them into the living room and continued its leg rubbing routine. Jeremy clenched his teeth, forcing himself not to kick the animal off his pant leg. This was his best Armani suit, for crying out loud. He didn’t want cat hair on it.”

Attila
My cat hero is named after Magdalena Scott’s companion of the same name. Magdalena often writes emails about Attila, and that gave me the idea of using the name in my book.
Notes: Male, Maine coon – big cat, sturdy, rugged – uneven, shaggy coat, long tail carried proudly, large, well-tufted paws – intimidating size – brown tabby with white underbelly and white paws
Normal cats have a total of 18 toes, with five toes on each front paw and four toes on each hind paw; polydactyl cats may have as many as eight digits on their front and/or hind paws.

Calliope
Calliope is one of Maddie James’ cats.
Notes: Calico – long hair – knows she’s beautiful – princess - tri-colored
Quote: “The top of the desk was empty except for a longhaired, tri-colored calico cat stretched out in the center preening herself. A tiny pink tongue licked a white paw in a leisurely manner. The cat didn’t even look up to greet them.”

Clio
Maddie James has a second cat named Clio. The real Clio is a tortoiseshell female. I changed Clio’s color in the book and his sex.
Notes: Orange tabby with white bib – nervous – comes up for affection some times after gets to know you
Quote: “The last cat in the room, an orange male tabby named Clio sat next to the water fountain watching the other cats in the room with a worried gaze.”

Jinx
I gave my husband a fiftieth birthday gift—a black cat named Jester. You can tell where I found my character Jinx.
Notes: Black cat – prowls, sneaky, pops up expectantly
Quote: “Jinx, the sleek black cat prowled the perimeter of the kitchen as if he couldn’t stay in one place for long.”

Gloria
My favorite cat of all time was Gloria. My daughter, the veterinarian, brought her home from college at Thanksgiving one year. Knowing my daughter is dangerous, because she has a knack for placing homeless pets. How do you think Maddie James got her two cats?


Notes: Tortoiseshell – female, this color is typically reserved for cats with relatively small or no white markings.
Quote: “Gloria was the oldest cat in the house, a tortoiseshell in color—reddish orange and black—with a distinctive orange stripe down the bridge of her nose.” 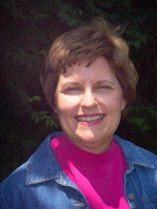 Jan Scarbrough is the author of the popular Bluegrass Reunion series, writing heartwarming contemporary romances about home and family, single moms and children, and if the plot allows, about another passion--horses. Living in the horse country of Kentucky makes it easy for Jan to add small town, Southern charm to her books, and the excitement of a horse race or a big-time, competitive horse show.
Jan also contributes to the Ladies of Legend series, a collaboration with writers Maddie James, Janet Eaves and Magdalena Scott. Set in fictitious Legend, Tennessee, these romances bring together the small town family atmosphere so many readers enjoy.
Leaving her contemporary voice behind, Jan wrote a medieval called MY LORD RAVEN. Her first paranormal Gothic romance, TANGLED MEMORIES, was a RWA Golden Heart finalist, and she’s recently released a second romance with paranormal elements called TIMELESS.
A member of Novelist, Inc. and the Romance Writers of America, Jan has published with Kensington, Five Star, ImaJinn Books, Resplendence Publishing and Turquoise Morning Press. She has recently self-published another romance set in the Bluegrass called BETTING ON LOVE.
Jan lives in Louisville, Kentucky, with three rescued dogs, two rescued cats, and a husband she rescued fourteen years ago.