Rather, an orange fur ball of terror. He's really  my son's cat but I told him he had to share.

(this was the best photo I could get before he darted off. BTW, he's chewing on my hair!)

Don't get me wrong, he can be rather sweet and sometimes he just sits there and lets you pet him while he purrs away. Or when he sleeps, those hours are nice. But since the first day we got him (10 days ago) he has been a handful.

Night one, he meowed all night. Sure, I understand. He's getting used to us. I get it but my kids didn't.
Two days later, my kids said he peed on a blanket. He hasn't done it again but who knows. Next day, I notice a flea on him. YIKES! That's like the death plague, in my eyes. So I run to the vet, get some meds and am hoping for the best. The following day I notice he's developed a raw patch on his neck, not where I placed his flea meds, but I was concerned. Back to the vet I go and the vet is like, "yeah, he's got a lession, not sure from what but it looks infected". She gives me a spray and he seems to handle the application well. My husband and I leave for an overnight trip while the kids stay at a relatives. House sitter (friend) comes by 2 times to check on cat and reports later all seemed well. His neck looks pretty good with a scab forming.

Then BOOM, Monday  we notice he's ripped off the scab and has started a new spot. GREAT! And now, he hates the spray medicine. You try holding down an 11 week old kitten with claws to spray something on his neck. I've got the battle scars to make my point.

So I'm sure it's back to the vet I go later today. I almost want to give up. Throw in the towel but seeing my son, who begged for a kitten, carry the cat around like his new best friend, my heart melts and I can't do anything. Don't get me wrong. We've owned a cat before (pre-son) and growing up, we were cat people but  I guess running after two kids and another on the way, I'm not feeling so much like Wonder Mom.

But to see him smile and have something of his own (he's the youngest soon to be middle kid) I can't help but soldier on.

I'd love to hear your words of wisdom. Advice from fellow kitten owners.

Grin and Barrett by Ruth J. Hartman is on Book Nibbles today. 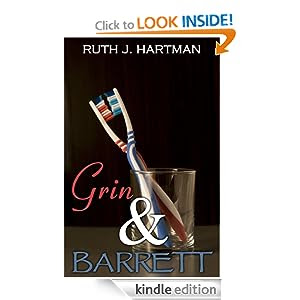 Remmie Grin is a self-sufficient dentist who has her life right where she wants it.That is, until handsome, flirty Dr. Victor Barrett moves in next door. He constantly bugs her about selling her practice to him—but she’s not budging.How can she convince him to leave her alone when all she really wants him to do is kiss her again?

Here are what a reviewers had to say about this cute story.

Paranmormal Reader "Renee"
Great Book, I loved it! If you like your loves stories with a lot of sass and humor. GET THIS BOOK!

Ruth J. Hartman spends her days cleaning teeth, and her nights spinning sweet romantic tales that make you giggle, laugh, and all-out guffaw. She, her husband, and their two cats, love to spend time curled up in their recliners watching old Cary Grant movies. Well, the cats, Maxwell and Roxy, sit in the people's recliners. Not that the cats couldn't get their own furniture. They just choose to shed on someone else's. You know how selfish those little furry creatures can be.

Ruth, a left-handed, tooth-scraping, Jeep driving, farmhouse-dwelling romance writer uses her goofy sense of humor as she writes tales of lovable, klutzy women and the men who adore them. Ruth's husband and best friend, Garry, reads her manuscripts, rolls his eyes at her weird story ideas, and loves her in spite of her penchant for insisting all of her books have at least one cat in them. Or twelve. But hey, who's counting?

"Better Than Catnip": A woman who runs a cat rescue center falls for a handsome man. But his son is terrified of cats!

"Flossophy of Grace": The main character, Grace, is a dental hygienist who falls in love with her patient.

"Pillow Talk": A klutzy tooth fairy falls in love with her dentist.

"Purrfect Voyage": A woman and her cat are stranded on a two-week yacht cruise with a cat-hating, handsome stranger.

"Grin and Barrett": Two dentists fight growing feelings of attraction for each other, as they compete for all the new patients in their small town.

"Murphy in the Paw-Paw Patch": A cat, born without pads for his paws, makes a journey to find some. At the paw-paw patch! (Children's book).

Most of her books include cats. Her characters, like Ruth in real life, live with several cats, and love every minute of it. Well, maybe not the litter box, but you get the idea.

"Life in Mental Chains," her first book, is a true-life story about her struggle with severe OCD, which also revolves around dental offices she worked for.

More information about Ruth and her books can be found at: www.ruthjhartman.blogspot.com
Posted by JenA at 7/27/2012 07:02:00 AM No comments:

Away but not forgotten...

I've been away and I can't tell you how sorry I am. I plan to update my pregnancy journal so, head over there next and hopefully it will clear things up a bit. Like mud!

While away, I've done some serious editing and reading. Not all of these books were on my summer TBR list but I enjoyed them the same.

All-American Girl by Meg Cabot
Lothaire by Kresley Cole
Dark Frost by Jennifer Estep
The Scorpio Races by Maggie Stiefvater
Kiss Me, I'm Irish by Bella Street
Jinx by Meg Cabot
Lock and Key by Sarah Dessen
Beige by Cecil Castellucci
Pants on Fire by Meg Cabot
The Start of Something Good by Gracie Lee Rose

Most are older titles but when the authors are fantastic, you can't help but pick up anything by them.

So tell me, what have you read this summer? Anything worth sharing?