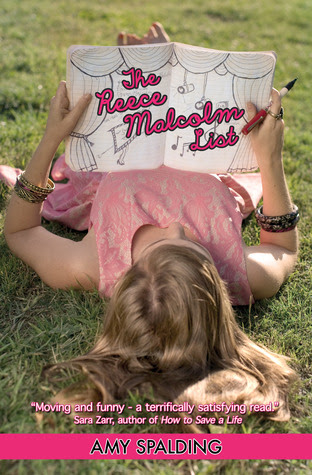 I might be a little biased since the author is a dear friend but I can honestly say I COULD NOT PUT THIS BOOK DOWN!

And look at that great cover! Well done, Ames!

Here's the blurb from GoodReads:
Things I know about Reece Malcolm:1. She graduated from New York University.2. She lives in or near Los Angeles.3. Since her first novel was released, she’s been on the New York Times bestseller list every week.4. She likes strong coffee and bourbon.5. She’s my mother.Devan knows very little about Reece Malcolm, until the day her father dies and she’s shipped off to live with the mother she’s never met. All she has is a list of notebook entries that doesn’t add up to much.L.A. offers a whole new world to Devan—a performing arts school allows her to pursue her passion for show choir and musicals, a new circle of friends helps to draw her out of her shell, and an intriguing boy opens up possibilities for her first love.But then the Reece Malcolm list gets a surprising new entry. Now that Devan is so close to having it all, can she handle the possibility of losing everything?


Ms. Spalding has done a fantastic job of making you love Devan. Even if you weren't a show choir/drama geek like some of us, you will instantly want to sign up for the next community theater production of Grease but you will also root for her and the relationship with her mother. I love her tough attitude when dealing with being the new kid in school. Heck, I've been there and I only wish I had half the guts to not care what people thought.

Yet, there's this vulnerable side to her that she doesn't share with anybody. She's still a girl who's lost her dad and now is forced to live with a mother she thought didn't want her. Man, tough stuff and Amy sucked me in and I couldn't help but love Devan.

I have a special place in my heart for Devan and thank you Amy for bringing these characters to life and a big thank you for the kissing. Who doesn't love kissing?

To keep up on all things Amy Spalding and her next release, Ink is Thicker than Water, visit here at theamyspalding.com.
Posted by JenA at 6/24/2013 10:00:00 AM No comments:

Four Nuts for The Crescent Chronicles

Blurb from GoodRead for Flight:
Sometimes you just have to take flight.A summer in New Orleans is exactly what Allie needs before starting college. Accepting her dad’s invitation to work at his hotel offers an escape from her ex-boyfriend and the chance to spend the summer with her best friend. Meeting a guy is the last thing on her mind—until she sees Levi.
Unable to resist the infuriating yet alluring Levi, Allie finds herself at the center of a supernatural society and forced to decide between following the path she has always trusted or saving a city that might just save her.


I won't include the blurb from Focus just so I don't give away too much about Flight.

I found this book through BookBub, I think and the blurb attracted me. So did the fact it was more of New Adult, which I'm totally loving.

The Crescent Chronicles is a different, casual, take on the supernatural. They're out there and living among us but it's no big deal, or so Levi tries to get Allie to believe. She's instantly attracted to him and vise versa and watching her try to stay away is interesting because she's sworn off guys.

Both books sucked me and I couldn't put them down. I'm eager for Book 3, Found that releases this year.

With this series, I was introduced to a new author. Most of Alyssa Rose Ivy's books are NA and in fact, over the course of 4 days, I read 5 of her books. They are quick and about 170 pages long. I'll add a review about her Clayton Falls series soon.

I'm hooked but I don't get it.

Have you ever liked something but not sure why?

Yesterday, I was channel surfing  because with the summer months, all my shows are on break, leaving my recorder empty. And with the kids home, I have to find something sort of wholesome.

I started with the Hallmark channel (my almost 12 year old daughter loves their movies) and some silly talk show with a has been singer was on and I'm not really into that. I arrowed up a bit and saw a marathon for The Secret Life of the American Teenager.

I shrugged and thought why not. The show has been on for a few years and the commercials seemed interesting. And I'm not gonna lie. There is a pull when it comes to teen drama shows. I'm a sucker.

How'd it go? My first few minutes of this show? Let's just say that I'm glad my kids were out of the room during because I think the word sex like echoed from the tiny TV speakers 50 times. I'm serious.

Seventh Heaven (which I never watched) was what I imagined or something along those try to be wholesome lines while we still touch on the serious issues. And sure, I'm not dumb to think teens don't talk about, think about, heck write about sex. It sells and the more scandalous the better but I guess with the show airing on ABC Family, I expected something different.

And what is with all the marriage talk. Really? Times might have changed since I was in high school but I don't think that much. With the high rates of divorce, what's the rush! I mean, they were 15! And the parents were all like sure, as long as you love each other and are pregnant. Um, that's not a reason to get married. Ask all the children of divorce out there.

Needless to say, I set up my recorder for future shows only to discover the series is over (not surprised; that's my luck). I am currently watching the series finale where all the lose ends will be tied up into a nice, sex designed, bow. And as I witness all the crying and I assume shockers, I can't help but compare this show with 90210, a very tame version. And I can relate or place the characters from both shows in my own high school: the quiet band geek with a dirty side; the bible thumper who is saving herself; the bad boy (you know who I'm talking about); the guy friend who will always have a major crush on you and while you know, you don't do much about it; and the easy one.

What are my overall thoughts? After watching the series finale, I can say for certain that I do not like Amy, the pregnant girl. I understand that teenage pregnancy is tough. Trust, I've had three while in my 20's and 30's and it wasn't always a picnic. And some of the shows let us witness the couple making it work which didn't seem at all real but I'm sure there are some teen parents who have a ton of help and can manage but they made it all seem doable, which I think is the wrong message. But what annoyed me the most was Amy leaving her son and boyfriend/baby daddy while she attends college in New York. I think it was selfish and as a mother hard to relate.