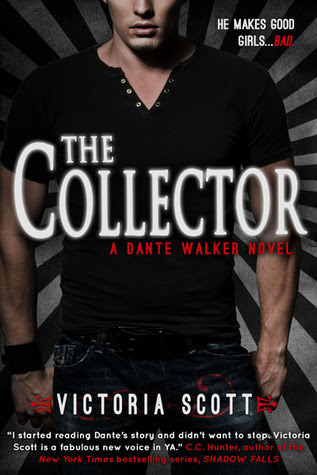 I discovered this book from an email sent out by BookBub. I believe it was free.

Here's the blurb from GoodReads:
He makes good girls...bad. Dante Walker is flippin’ awesome, and he knows it. His good looks, killer charm, and stellar confidence have made him one of hell’s best—a soul collector. His job is simple: weed through humanity and label those round rears with a big red good or bad stamp. Old Saint Nick gets the good guys, and he gets the fun ones. Bag-and-tag.Sealing souls is nothing personal. Dante’s an equal-opportunity collector and doesn't want it any other way. But he’ll have to adjust, because Boss Man has given him a new assignment:Collect Charlie Cooper’s soul within ten days.Dante doesn't know why Boss Man wants Charlie, nor does he care. This assignment means only one thing to him, and that’s a permanent ticket out of hell. But after Dante meets the quirky Nerd Alert chick he’s come to collect, he realizes this assignment will test his abilities as a collector…and uncover emotions deeply buried.

My thoughts:
I love this book and had a hard time putting it down in order to feed my family! The hero, if you can call him that, is snarky, smooth and confident and I couldn't get enough of him. And I really enjoyed watching him change throughout the story. I haven't read many books from a male's perspective and I have to say I felt most of the feelings and dialogue were spot on. Guys are dorks!I'm eager to continue this series but am bummed I have to wait until August 2013!
Posted by JenA at 4/11/2013 02:00:00 PM