*Rolls out the red carpet* *Sets up the paparazzi cameras*

I'm more than excited to have my writer bestie, Julie Anne Lindsey on today talking about her latest Honey Creek Release. Love Blossoms is one of my favorite in her Seeds of Love series. 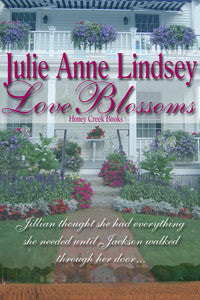 The cover is great but it doesn't do it enough justice for the wonderfully, sweet story inside. I instantly fell in love!

Without further chatting from me, heeeeeeeeeere's Julie!

My second sweet romance novella, Love Blossoms, released last week and I’m all smiles. There’s something intoxicating about this little town. I find myself loitering there often. Honey Creek is the kind of place where anything feels possible. I think that’s why my heart jumps to romance whenever I consider a new story for the imprint. Honey Creek is a small fictitious town in rural Ohio. The scenery is magical in ways only the Midwest can be. The people are a touch old fashioned. They’re devoted to family, country and community. They work the earth. Trade sweat for pay and lay their hearts on the line for love.

The idea for Love Blossoms came at a friend’s wedding. It was an enchanting event, but my heart broke for the Maid of Honor. She’d planned every last detail to make the day perfect for her friend, and it was. But I found her crying behind the reception hall. Her husband asked her for a divorce. She hadn’t told a soul. That would’ve been a downer on our friend’s wedding and she wasn’t willing to be so selfish. So, she donned her formal wear and a smile. No one ever knew.

Later, her tears wreaked havoc on my imagination, and Jillian Parker was born. As I began Love Blossoms, I learned Jillian suffered a broken heart after a cancelled engagement. She moved on, but shut herself off from the idea of true love. I thought she needed to know she was wrong. True love exists. Men worthy of our hearts are not extinct. In fact, they are sometimes closer than we think.

That’s when I let Jackson Tate roll into town and change Jillian’s mind. This story is a quick trip to the castle. True love in a hurry. I know there are haters. Insta-love is a hot topic right now. But I say sometimes it is what it is. Sometimes there aren’t years of turmoil and breakups and reunions. Sometimes, a heart knows. I hold on to this truth because I choose to believe in the fairytale.

If you’re in the mood for a sweet romantic read with a very happy ending, I hope you’ll visit Honey Creek. The sun is setting, bullfrogs are croaking and the crickets are singing, “Come on.” Sweet tea or hot cider. Fresh summer strawberries or crisp fall apples. You’ll find it there. And taking a trip to Honey Creek is as easy as  Amazon : ) I hope to see you there!

There’s a wedding coming to Honey Creek and the whole town’s preparing for the party. When Jillian Parker agreed to host a few groomsmen at her inn, she had no idea what she was getting into. One of those groomsmen is Jackson Tate, and he’s making her concentration completely impossible. He’s funny, fascinating, frustrating, and leaving in a week. Jillian does not have time for that level of distraction. With Jackson nearby, events to coordinate, a bride to please, and an ex-fiancé to dodge, her peaceful life’s getting crazy fast. With any luck, she’ll survive the week and put the whole thing behind her as soon as possible.

…But not if Jackson has anything to say about it.

“You used to cause quite a stir,” Jackson said into Jillian’s ear. “I bet you haven’t danced since you came home.”
Jillian smiled the demure smile she’d perfected long ago and slipped out into the night beside Danielle. A laugh split her friend’s face, and Danielle hollered into the night sky. Watermelon Crawl boomed from the truck speakers. An outrageous smile spread across Jillian’s face until her cheeks ached. Memories flooded over her, and she was instantly 10 years younger. Her muscles tingled, and the steps came back like a reflex to the sound of her friends’ laughter and the sight of embers floating in the night sky.
Her skirt swung left and right along with her toe. Material caught her thighs and infused her with energy. Beth’s squeal blasted out of the kitchen door, and she nearly took Jillian down dashing onto the dirt beside her.
“Wooooo!”
Nothing mattered. How could anything matter?
The small troop of dancers stomped and turned in the firelight. Fireflies and golden embers floated and blinked against the deep navy blue sky. No walls contained them; no neighbors complained about the noise; no traffic sounds interrupted the cricket and bullfrog chorus. There was no more freedom on earth than she had right there. A round of clapping went up as the bodies slowed and ambled in place, laughing and congratulating one another. They still had it.
Giggles seasoned the air, and the music changed smoothly to another lifelong favorite. Fishin’ in the Dark . She thought of all the groomsmen planning to night fish before Mrs. Prattle’s punch kicked in the night before. In a flash, men and women sided up ready to twirl and swing in pairs. For a moment, Jillian stepped back to watch the couples, but a massive shadow blocked the light from the fire. Jackson hitched an eyebrow and nodded her way.
In the space of a heartbeat, the group was in motion, and so was she.
“You haven’t lost it, I suppose,” he said as their bodies came together.
She made the most of the time they were apart, enjoying his audience, strutting her stuff. When they met again she said, “You’ve noticed.”
“Honey, every man in town’s noticed.”
The couples began to swing, but Jillian found her body airborne. Like a feather in the wind, her feet swung left then right of Jackson’s hips. Clapping and hooting
ensued. No sooner was she grounded again than she began to twirl. The rush of endorphins and joy shot up from her feet to her hair, and her heart threatened to fly her
to the moon. 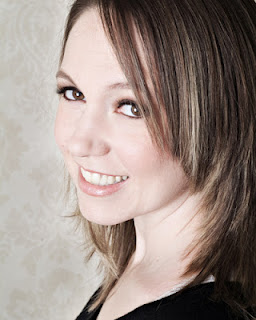 Mother of three, wife to a sane person and Ring Master at the Lindsey Circus. Most days you'll find me online, amped up on caffeine & wielding a book.
You can find my blogging about the writer life at Musings from the Slush Pile
Tweeting my crazy at @JulieALindsey
Reading to soothe my obsession on GoodReads
And other books by me on Amazon

Thank you so much Julie!