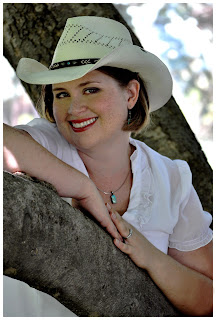 First off, I have to say how excited I am to have you.  Sarah and I went to high school together and she and I will be doing a joint signing on December 11th!  She's got the kisses, I'll bring the hugs!

Welcome Sarah!  Tell us a little about A Man of His Word. 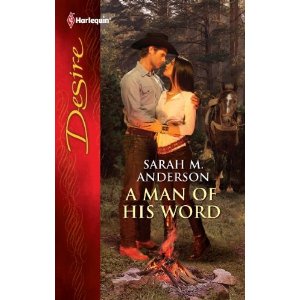 The official blurb is: Attorney Rosebud Donnelly has a case to win. And she never lets anyone see her sweat.  But her first meeting with Dan Armstrong doesn’t go according to script.  No one warned her that the COO of the company she’s fighting would be so…manly. From his storm-colored eyes to his well-worn boots, Dan is an honest-to-goodness cowboy.  But is he honest? Her yearning for the Texas tycoon goes against reason, against family loyalty, against everything she thought she believed in.  And yet, in Dan’s strong arms, Rosebud feels she might be ready to risk everything for one more kiss….
Why a western theme?  Are you into Native American culture? Do you have a family history of it?
My parents were history teachers, so instead of vacations to Disneyland or Sea World, we went to Kitty Hawk (first plane flight) and Mount Rushmore. I was horse crazy when I was a girl, and the Lakota Sioux were a horse-intensive culture. The moment I showed the slightest interest in American Indians, my parents encouraged me to learn more. To them, it was about education. To me, it was almost an obsession. I learned how to bead and collected American Indian art (trust me, not normal for a twelve-year-old girl).
I grew out of it, however. I discovered boys and Jane Austen novels, and for a long time, I forgot about American Indians and horses. When I started writing, my stories were set on my in-laws’ farm in central Illinois. However, the fourth book I wrote featured a heroine who wanted to get away from the family farm. She wound up going west and met a cowboy who was also an Indian. That book worked. The dialog was snappy and funny, the sex was sexy, and the characters were real. The whole thing didn’t suck, which was a first. I had fun writing it, and people had fun reading it. My writing went west and I never looked back!
What attracts you to romance?  Were you always an avid reader of it?
I will admit that, during the years I was pursuing Bachelor’s and Master’s degrees in the Victorian novel that I not only did not read romance, but I looked down my nose at it. Of course, I didn’t consider Jane Austen romance—that was culture! But the nice thing about life is that it provides you with perspective. I discovered a few books set in Victorian England that seemed just like the books I had studied, but they were labeled ‘romance’. My knee-jerk reaction was to dismiss them out of hand, but the thing was, they were really well written and I enjoyed the heck out of them. Plus, I’ve reached a stage in my life where the news—wars, recessions, abuse, death—feels very personal and hopeless. I’ve discovered that the happily-ever-after that is all but guaranteed by romance novels gives me more hope and satisfaction than reading CNN does. I’m a convert!
Often, romance writers take a pen name.  Did you consider one?
I did, but I already have a nickname, so I decided that I didn’t want to add a third name to the list of things I have to remember. Some days, I wish I had taken a pen name—not because people bully me for writing romance, but because I’d like to have another layer of privacy between my public persona and my family life.
Switch hats for a minute.  Mom, wife - how do you manage it all?
You are asking that question at the wrong time! Normally, it’s not that hard. I only work part time outside of the house, and I pick up my son every single day from school. It helps that I have an extremely patient and supportive husband. However, at this point, with the holidays here, A Man of His Word being released tomorrow (!), a book due on Jan. 6th, I don’t think I’m managing much of anything right now!
What does your family think?  Are your kids old enough to understand what you're doing?
My son is in first grade, and this year I went to speak for career day. I took in bookmarks the kids could color and talked about writing. He’s very proud of me being a ‘real-life arthur’, as he says it. I don’t think he grasps the whole concept of ‘romance’, being as he still occasionally thinks girls have cooties. The rest of my family is very supporting. My grandmother, Goldie M. Lucas, was a published poet and author, and just about everyone in the family believes I received her writing gifts.
What are you working on now? What’s next?
My second book, which will be out in July, just got a new title: A Man of Privilege. James Carlson is a prosecutor building a case, but he needs the testimony of a reformed hooker. The third book, tentatively titled A Man of Honor, will be out in September, which means it’s due in January. Nick Longhair left the reservation to make his name. But when he has to go back home, he discovered his high-school sweetheart has a baby that may be his.
Both books take place in the same world as A Man of His Word—Rosebud Donnelly, the heroine from that book, pops up in each of the next two. However, they’re not true sequels, just loosely connected stories.
Thanks for having me today, Jennifer! I’ll give away a signed copy of A Man of His Word to a commenter who tells me what the first romance they remember reading was! I’m also giving away a custom-made Locket of Love (worth $185) on January first. Everyone who comments is entered to win! 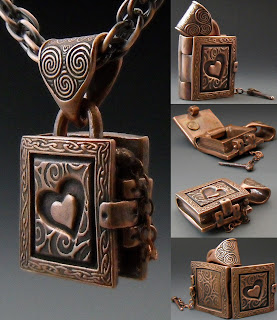 This post is brought to you as part of the A Man of His Word Blog Tour. U.S. residents only. For a complete tour schedule and rules, visit www.sarahmanderson.com. Comments on this blog will be entered to win a signed copy of A Man of His Word. All blog comments are added to the Jewelry Grand Prize list. Jewelry Grand Prize announced on January 1st, 2012 to one randomly drawn name on the list. Next tour stop is the Writing Playground on December 6th.
Beginning December 6th, 2011, A Man of His Word is available! Visit your favorite bookseller, at Amazon, or for the Nook.
Bio: Award-winning author Sarah M. Anderson may live east of the Mississippi River, but her heart lies out west on the Great Plains. With a lifelong love of horses and two history teachers for parents, it wasn’t long before her characters found themselves out in South Dakota among the Lakota Sioux.  She loves to put people from two different worlds into new situations and to see how their backgrounds and cultures take them someplace they never thought they’d go.
When not helping out at school or walking her rescue dog, Sarah spends her days having conversations with imaginary cowboys and American Indians, all of which is surprisingly well-tolerated by her wonderful husband and son.
Posted by JenA at 12/05/2011 02:01:00 AM

Email ThisBlogThis!Share to TwitterShare to FacebookShare to Pinterest
Labels: Sarah M. Anderson; Man of His Word